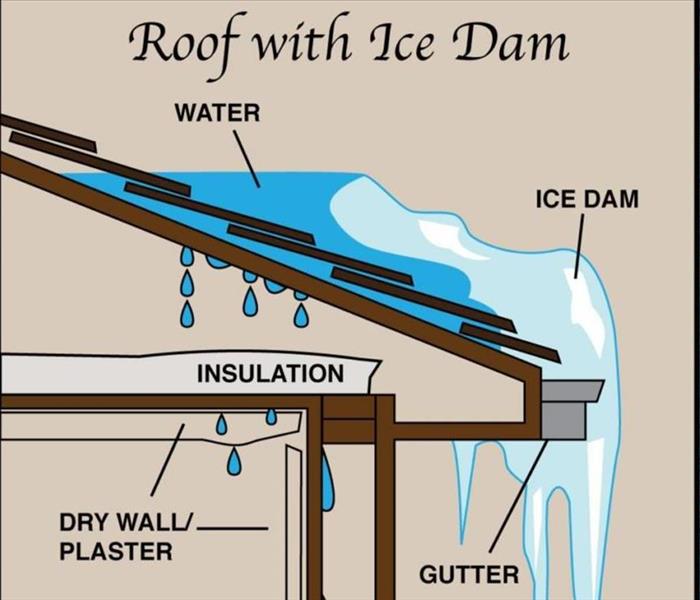 SERVPRO® of Kirksville restores your home or business after a storm, so it's "Like it never even happened."

When old man winter blows his was into town, he can leave a wake of damage unlike the storms of other seasons. Freezing rain, snow and ice can all be the beginning of damaged that can occur during a winter storm.   Ice Dams are just one of the ways that winter storms can create mayhem within your

An ice dam is an ice build-up on the eaves of sloped roofs of heated buildings that results from melting snow under a snowpack reaching the eave and freezing there. Freezing at the eave impedes the drainage of meltwater, which adds to the ice dam and causes backup of the meltwater, which may cause water leakage into the roof and consequent damage to the building and its contents if the water leaks through the roof, according to wikipedia.org.

Ice dams occur on heated buildings with sloping roofs in cold climates with deep snow accumulation. Ice dams on roofs form when accumulated snow forms an insulating layer under cold conditions that would cause the freezing point to be within the snow layer if it were not subject to melting. Instead, building heat coming through the roof's surface melts the snow resting on it. This causes meltwater to flow down the roof, until it reaches below a place on the roof's surface that is below freezing—typically at the eaves where there is no building heat. When the meltwater reaches the frozen surface, ice accumulates, growing a barrier that impedes further passage of meltwater off the roof. Ice dams may result in leaks through the roofing material, possibly resulting in damaged ceilings, walls, roof structure and insulation, or injury when the ice dam falls off or from attempts to remove ice dams.

The melting of roof snow comes from the combination of three basic causes:

If any of these factors is absent, ice dams cannot form. Above freezing air does not promote ice dams, nor does granulated spring snow on a roof, which has poor insulating capabilities, nor does a roof that does not warm to above freezing at its surface. Ice dams may occur when the under-roof temperature is above 30 °F (−1 °C) and the outdoor air temperature is below 22 °F (−6 °C).

If old man winter tries to enter your roof, call you local professionals at SERVPRO® of Kirksville. 660-665-3390.